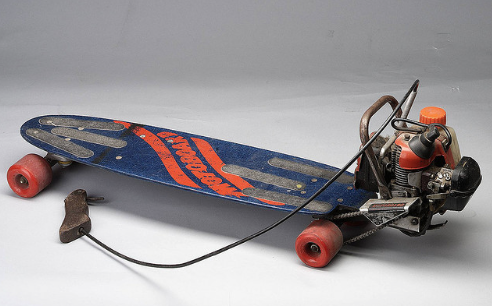 Back in 1975 the first motor based board ‘electric skateboard’ was actually non-electric! The Motoboard. As we know now, came in to production- which is kind of contradictory to the title I know!

In late 1990’s Louie Finkle introduced the world to a new type of skateboard which was the new wireless form of electric skateboards. The product was revolutionary and was an instant hit, but yes it was pretty expensive so it couldn’t be owned by everyone. In 2006, a group of friends collaborated together to improve the model of Louie’s electric skateboards.

Nonetheless, after the development of the gasoline powered skateboards, there were a fair few reasons which caused these motorised boards to get banned like: noise produced by the engines and gasoline engines that were creating pollution.  But the fact is that California is a ruling state for producing motorised skateboards.

The use of longboards is very common among youngsters but not every normal individual was able to enjoy these slick electric rides. However, with the current advancement and development of new companies such as ours and the Magneto being a good example, electric longboards are becoming more easily available for public use.

The speed and actual capacity of an electric longboard depends on many variables including but not limited to, the battery used for fueling it, lithium or lead, the size of the battery and of course the quality and the output of the motor and drive system.

We decided, to provide an all round experience for our users with selling a board that will offer speeds up to 20mph delivered from a powerful 1200W brushless motor. An 8AH Lithium battery is capable of providing riders with hours of use and a 14-17 mile range- this is massively dependant on riding style, surface friction and gradient. The Magneto is also built for carving and handling with it’s concave deck shape. We are also conscious the weight and charge time were big factors in solving the last mile problem so the Magneto board is light at 6KG and a full charge takes between 2-3 hours.

Here’s some footage that depicts how far we have come.